Home for the Holidays

For some people, a model train running under the Christmas tree is a holiday tradition. For others, the holidays offer time to start building your own personal empire. Whatever you have in mind for this holiday season, you’ll get the best, fastest results by choosing the best track planning software: 3rd PlanIt.

In 2016, the Disney family wanted to have a very special layout built for their new “Home for the Holidays” exhibit at the Walt Disney Family Museum in San Francisco. In August they called Constructioneer LLC in Atlanta, a firm that built animatronics and models for Disney on many occasions. Their goal was to model Walt Disney’s property as it existed in the early 1950’s, including his 1/8th scale ride-on steam railroad. The exhibit would open in early November, giving only 82 days to plan and build the layout and models!

Constructioneer chose El Dorado Software to play a key role in the project. The owner, Randy Pfeiffer, would plan and build the track, DCC system, and PLC control system that routed the train on a path around the layout. The layout would have a welded steel frame and use High Density Urethane (HDU) for the terrain. It needed to break down into six pieces that could fit through the doors and elevators at the museum. It was to have scenery that matched the original as closely as possible, including several trees that were of particular significance to the Disney family. This was truly a Dream Layout, but had to be on display in just 81 days.

The track plan included a terrain mesh for the 5-acre property based on borders and elevations in original blueprints provided by the Disney family. The overall scale would be 1:25, resulting in a 16x11 foot layout. At 1:25 scale, the 1/8th scale railroad would make most sense in N scale (1:160). However, the Disneys wanted the train in HO scale so it would be easily seen in detail. This layout was as much about showmanship as authenticity! Since HO scale is 1:87.1, the model train would be twice as large as the original. Walt chose only #6 turnouts for his layout, and we wanted to keep true to the wisdom of that choice. The layout also had tunnels, two of which went under other track. This was a challenging set of requirements and the clock was ticking! 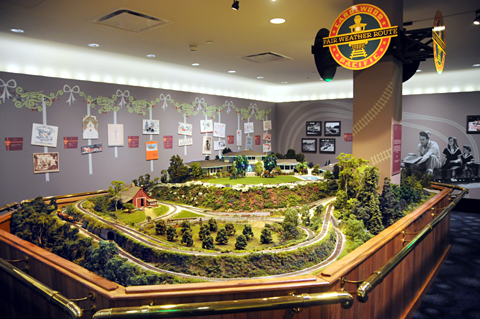 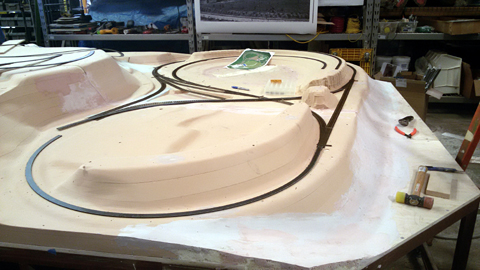 3rd PlanIt’s comprehensive, accurate, fast and easy-to-use features made this design possible. The blueprint scan was brought into the track plan and scaled to the required size. Many layouts use this technique, whether to replicate appealing track in a prototype or fit a published design to your personal layout space.

In this case, the goal was to follow the route and elevation of Walt’s original railroad as faithfully as possible using #6 turnouts everywhere. As is always the case, one design tradeoff had to be made: there is a #6 curved turnout at the right entry to the main yard area. The HO scale turnouts are about twice as large as the originals, so it wasn’t possible to bring a smooth curve into a straight turnout here.

The train is pulled by a model of the Lilly Belle made by Bachmann. 3rd PlanIt let us confirm there would be clearance between the locomotive and the tunnel portals. In one instance the clearance was only 3/16”, and we were pleased when the actual clearance when built was exactly 3/16”. Although Walt could not have ridden the train through the tunnels, the trains ran perfectly from end to end.

To meet the aggressive schedule, the layout was built by a team of five, along with an artist and scenery specialist. Many operations were done in parallel: the sectional steel frame was built while the track plan was developed, the HDU terrain was cut on a CNC router from an STL export file immediately after the track plan was complete, and the PLC and DCC systems were prototyped and programmed while the terrain was being built.

Randy flew to Atlanta and began building track while the HDU was being finished. 3rd PlanIt printed the 1:1 scale track in the yard and tunnel area, allowing the track with critical positioning to be built exactly as planned while the terrain was prepared and sectioned into six pieces. The fully-assembled “spider” was placed on the terrain several times to ensure the carefully positioned tunnel walls hade adequate clearance. 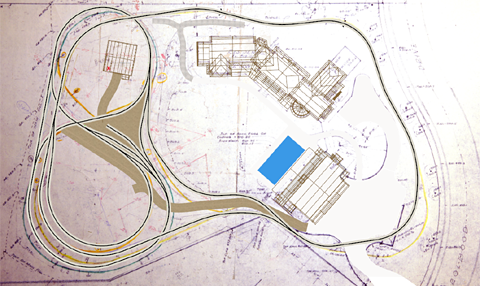 To locate the long stretches of track, Paul used the CNC router to cut splines from expanded PVC. 3rd PlanIt lets you make them for your layout, and they even take changes in elevation into account. When the splines are pinned into position, the centerlines and outlines of the ballast can be drawn using a simple jig. After the ballast has been glued into position, the splines are placed between the rails to ensure exact positions and smooth curves!

The track and yard in the lower section was laid before any scenery work began. Track was laid from one end to the other, keeping ahead of the scenery and wiring the DCC system. Once the track was complete, Randy built the PLC cabinet, connected the DCC system to the track and PLC controller, and wrote the program that controls the train. Hall effect sensors let the PLC find the train as it moves and position turnouts to control the train’s path. 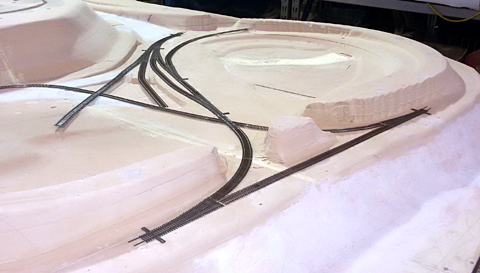 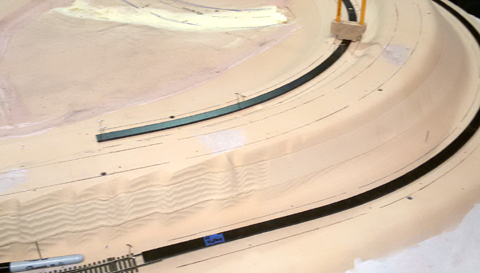 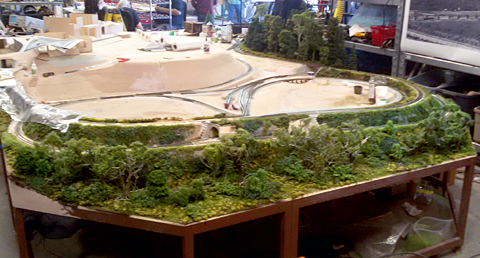 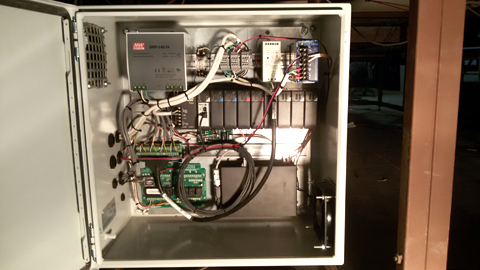 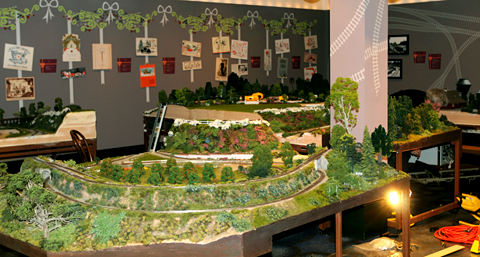 Quite literally “at the last minute”, the layout was disassembled and put on a truck to San Francisco. It arrived a few days later, and the team was there to assemble it in the exhibit area. We were all struck by how nicely the room was finished and the care the Disney technicians took to give the layout complementary lighting.

The layout went together well, especially considering the incredibly difficult schedule and modular assembly that weighed 1800 pounds. It took five of us working 80 days, 14 hours every day to do it, but it was done on time and ran reliably for the ten weeks it was open. It’s on exhibit again this year through early January 2018 (www.wdfm.org).

Choose 3rd PlanIt for your design needs. You’ll be able to accomplish things you never thought possible - and be inspired to try new, complex designs. It’s the CAD software chosen by professional designers, railroad clubs, and model railroaders just like you. This unsolicited user testimonial tells the story. 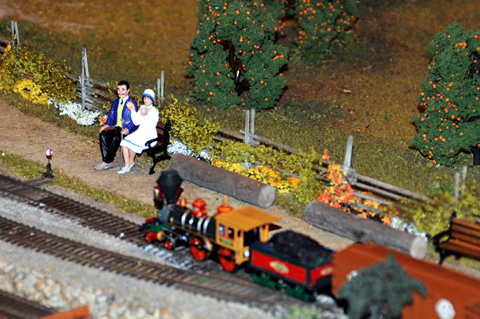 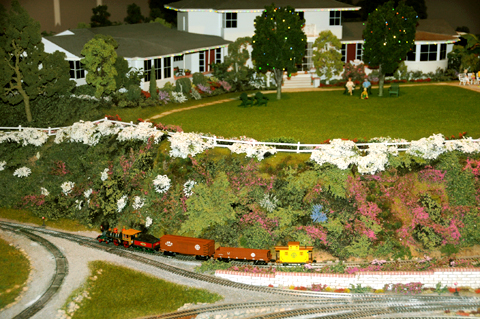 Just a quick note to say thank you for developing the great software! It is easy to use, intuitive, powerful and creative. Way more features than I expected, but am quickly finding ways to use them. Really am enjoying the track planning and seeing ideas come together. Love the SoftTrak tools as well as the options on the connect tools. Wow, do they ever make coming up with options easy!

Clearly this was a labor of love.  Frankly at this time, I am wondering why I was hesitating to buy the software.  I guess I was assuming they are all about the same.  They really are not – this is really something different.  Just wish I had bought it when designing my previous layouts!

Anyway, thank you for providing such a great tool to the hobby. It truly is head and shoulders above the rest. 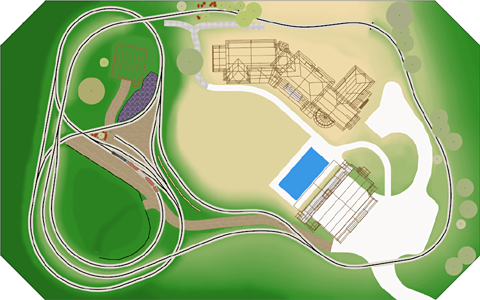 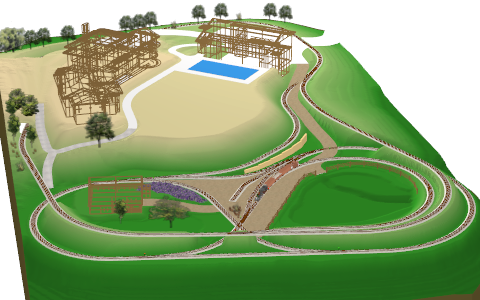 The 2D plan view, including track, driveways, terrain and buildings.

The 3D view gives a realistic representation of your finished layout. 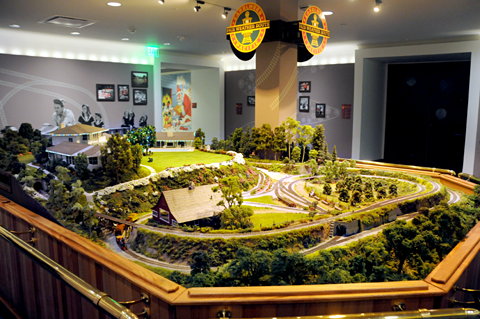 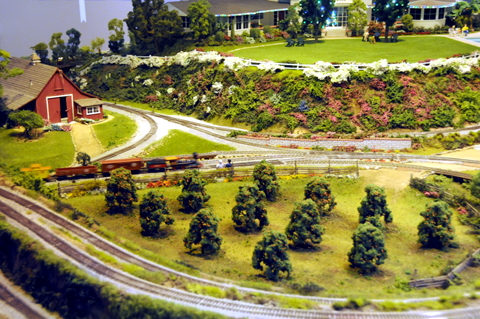